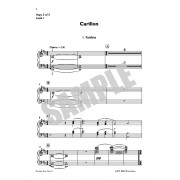 ‘Carillon’ is the French word (for ‘a pealing of bells’) used in English for the sets of great ecclesiastic bells in European cathedrals.