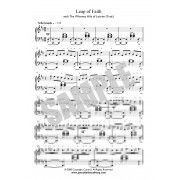 Leap of Faith is a set of two slip jigs, the first of which is the old traditional slip jig â€˜The Whinney Hills of Lietrimâ€™ and the second (original) tune evolved from the opening notes of the old, has a joyful, risky and leaping melodic figure in the second part.  This is a metaphor for life!

While a regular piece in the repertoire of the Irish Harp Orchestra (as a 2-part ensemble), this was first recorded by Janet Harbison (solo) on the album â€˜By Strangford Waterâ€™ (2020).

Also available as an Ensemble in 2 parts (for Intermediate and Advanced players).