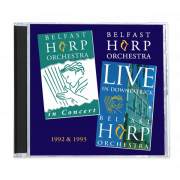 Belfast Harp Orchestra (BHO)
comprises 20-25 harpers from both Catholic and Protestant communities in Northern Ireland (mostly) who perform together commemorating the bicentenary of the Belfast Harpers’ Assembly of 1792.

The Belfast Harpers’ Assembly of 1792
was probably the most significant event in Ireland’s cultural history where 10 of Ireland’s last itinerant harpers came to Belfast to have their music written down before it was forgotten forever. Theirs was an oral tradition, passed from generation to generation of harpers ‘by ear’ – and so it remains today, 2 centuries later.

The music on the 1992 album comes entirely from Edward Bunting’s three volumes of the old harper’s music published in 1796, 1809 and 1840 and the music of the second, ‘Live in Downpatrick’ celebrates a special anniversary in the commemoration of St.Patrick in the ancient Cathedral of Down, where St.Patrick is buried.

“In Concert”
is the first of the two recordings here which was recorded from 3 of the concerts on the Belfast Harp orchestra’s first concert tour of Ireland - which they subsequently took on tour through Europe and the United States of America.

“Live in Downpatrick”
is recorded from the one concert performance in the Cathedral of Down – the day after the BHO returned from their tour of America with the Chieftains where they performed in halls including New York’s Carnegie Hall and Washington DC’s Kennedy Centre.
Both of these albums were originally released as a cassette and this CD made in 2017 is produced as a ’BHO25 Legacy Album’.

We ask our listeners to be forgiving of the shortcomings of the quality - and our youthful excitement as one or two tracks
were performed rather faster than we would perform them now.