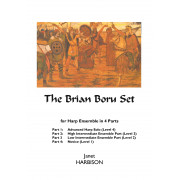 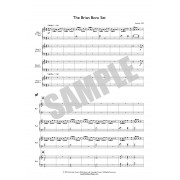 Brian Boru is a heroic figure in Irish history who lived a thousand years ago. As Ireland’s High King, he united all the warring tribes in Ireland under his leadership to defeat the Viking invaders. His birthplace and seat of power was at Killaloe on the Shannon River at Lough Derg where his fortress is a preserved archaeological site.

Brian Boru’s March is one of the scores of the IRISH HARP ORCHESTRA (formerly the Belfast Harp Orchestra). This arrangement was first recorded by the Belfast Harp Orchestra in 1994 on the album ‘Carillon’ (on the IHCP label). It has also been featured on the Polygram album entitled Celtic Harpestry and the PBS programme and commercial video by the same name. The harp orchestra is a harp ensemble tutored and with up to 24 harp players performing in up to 8 parts.