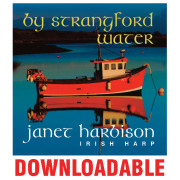 For many years (only about 40), my everyday harp was a Japanese ‘Aoyama’ 120A – until Camac harp manufacturer, Joel Garnier, awarded me ‘The Harp of my Dreams’ shortly after the Dinan harp festival in 1994. He felt that a player of my stature (!!) should have a wonderful instrument – and he invited me to his gallery in Paris to choose any harp from his store. But, I liked different aspects of different harps and felt strongly that the strings should be so light, the distance between them so wide, the instrument not so heavy and the shoulder at this height – oh, and it had to have the Brian Boru Harp bling of a silver frontispiece to flash stage lighting back into the audience! So, we designed ‘the harp of my dreams’ together sitting on a large sheet of paper on the floor and an Irish 20 pence coin with the Brian Boru harp on it, Ireland’s national emblem. Unfortunately, Joel didn’t live to see the harp finished – but now many people love to play the Camac ‘Janet’ world-wide.  I had promised Joel that I would compose a tribute to him in gratitude for his love, support and generosity - and here it is. The first performance of ‘Farewell Joel’ was at his 10th anniversary concert in Paris, 2010 - hosted by current Camac director, Jakez Francois. Thankyou Joel and Jakez.

By Strangford Water - The Music Book and CD