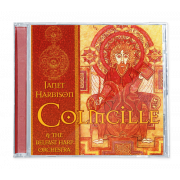 An original suite for soprano, choir and harp orchestra composed for the 1400th anniversary in 1997 of St.Colmcille, one of Ireland's greatest saints who was himself a bard, artist and holy man. Inspired by the ancient chants of the early Christian church in Ireland, this work is a dramatic presentation of the story of Colmcille in music, song and psalmody.