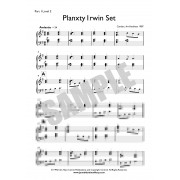 The Colonel John Irwin
The Irwin family of Tanrego House, Tireragh, County Sligo was granted land in Ireland under the Cromwellian settlement – where Cromwell paid off his army officers after the various wars in mid 1650s with tracts of newly conquered lands. In Carolan’s time, it was Colonel John Irwin who was the head of
the family who had fought with King William at the Battle of the Boyne. In the song that went with this tune, Carolan celebrated Colonel John’s gaiety, bravery and ‘Irishness’ calling him an ‘English Irelander’.