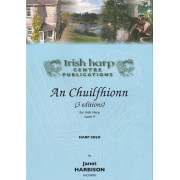 Probably Ireland’s most beloved and ancient of love-songs that has evolved significantly through the centuries.

In 3 renditions from the 18th and 20th Centuries.  Firstly it is presented with minimal adaptation from Edward Bunting’s transcription of the singing of Denis Hempson, the oldest harper at the Belfast Harpers’ Assembly.  (In the script, I also add phonetic pronunciations to assist unfamiliar singers with the Irish lyrics.

Denis Hempson also performed 4 Variations to the air composed by Cornelius Lyons of the 1720s to which I have added a second version of the 4th Variation which I adapted for the Belfast Harp Orchestra in 1992 (performed on the recording).

Lastly it is presented it in an instrumental version which I arranged and performed myself as a young professional in Knappogue Castle in the mid 1970s.

On the recording: Belfast Harp Orchestra 1992-3