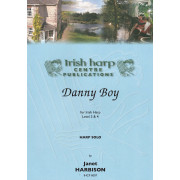 Ireland’s best known and loved song in two versions: the first for Beginners – Intermediates and the second for Advanced players.

The tune originates from the 16th century harper’s composition ‘Codladh an Oigfhir’ (‘The Young Man’s Dream’) which was published by Edward Bunting in 1796.

In the early 1800s, the tune was again written down by a lady Jane Ross of Limavady Co. Londonderry from the playing of a passing fiddler – which she sent to the folksong collector George Petrie as an anonymous tune - which he published in 1855 as the ‘Londonderry Air’ - and in 1910, the English song-writer Fred Weatherly put his text to it and titled ‘Danny Boy’.