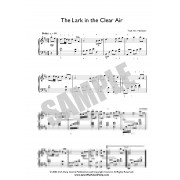 Lark in the Clear Air - Solo - Download with Free MP3

The Lark in the Clear Air was one of the most popular Irish airs of the mid 19th Century when Sir Samuel Ferguson appended his new song text of the title.

This followed the enormous popularity of Thomas Moore’s famous Irish Melodies published between 1808 and 1834.

The most popular setting of the song in orchestral arrangement is by the young Ralph Vaughan Williams (early 20th century) who, with Cecil Sharpe, was responsible for amassing an enormous repository of English folksong for future generations.

15. The Lark In The Morning and The Clumsy Lover - A Christmas Collection

Lark in the Clear Air