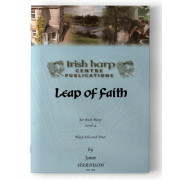 For Harp at Level 4

Leap of Faith was composed in 2002 when the composer decided to move home to the Republic of Ireland after 18 years of working and living in Belfast. Her new life in Castleconnell in county Limerick represented a leap of faith - a new beginning for her harp orchestra movement in the southern province - but one bringing her back to family roots.

In Castleconnell, Janet established the Irish Harp Centre and Irish Harp College from which her work continues to flourish.

Leap of Faithis a set of two slip jigs, the first of which is the old traditional slip jig 'The Whinney Hills of Lietrim' and the second evolved from the opening notes of the old - with a leaping melodic figure in the second part. Also available as a pdf download.