Fanfare for the President Solo 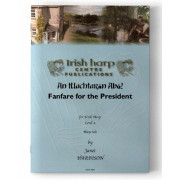 for Harp at Level 4

On 11th November, 1997, Mary McAleese was inaugurated as the eighth President of Ireland. She is a barrister and former Professor of Law. Born in the early 1950s in Belfast, she is the first Irish President to come from Northern Ireland and with her background of growing up in Belfast during the violent times that have come to be known as 'The Troubles', she had very particular experience and talent that has marked this period in Irish history with a special charisma, intellect, humanity and statesmanship.

She is particularly admired for her role in building bridges across the community divide and is a much admired hero of Irish women worldwide.

We first became acquainted in 1987, shortly after Mary was appointed Director of the Institute of Professional Legal Studies at Queen's University where I was a research fellow in the Institute of Irish Studies.

During a conference sometime that year, the two of us had escaped a rather boring presentation to the same bit of garden where we engaged in our own debate and exchange of academic interests, stories and ideals.

I was delighted when in 1994, she became the first female Pro-Vice Chancellor of the Queen's University of Belfast, but never so much as when she was appointed President of the Republic of Ireland in 1997.

I was particularly privileged when I accompanied her officially on her state visit to China to perform at the state occasions and give recitals and masterclasses at the Conservatoires of Shanghai and Beiging.  This visit was the first of any western Statesperson to that mysterious and intriguing country.

This piece was composed as a personal tribute to Ireland’s first lady and performed for her at the Glencolmcille Harp Summerschool in the late 1990s.  Now in her second term of office, she is still a much admired icon of Ireland and long may she enjoy her reign as one of Ireland’s most beloved leaders.