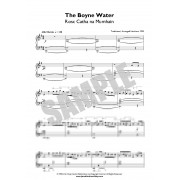 The Boyne Water is the siren tune of the Orange Order, a loyalist (British) political organisation in Northern Ireland whose members celebrate the triumph of King William of Orange (of the Netherlands) at the Battle of the Boyne in 1689 (where this tune was played by King William’s fifers and drummers).

But this tune is also known as ‘The War Cry of Munster’, a republican (Irish) marching anthem – so this tune is emotive, powerful and evocative – and shared by both traditions in Northern Ireland.