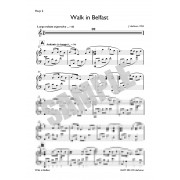 Walk in Belfast was composed by the author in 1996 while walking one crisp Autumn Sunday morning alone on Cave Hill, the scenic wooded table mountain overlooking the city of Belfast in Northern Ireland. The town was glistening in the morning light, but there was much sadness with the people of Belfast at that time in the wake of ‘The Troubles’. If only the beauty and sacredness of the place might inspire the divided community to peace-fulness.

Walk in Belfast is one of the scores of the multi-award winning Belfast Harp Orchestra (1992-2002) which was established as a cross-community concert troupe in Northern Ireland celebrating Northern Ireland’s unique heritage in music, song and dance. In its 10 years of existence, the orchestra of 22 harpers (between the ages of 10 and 17) and playing in up to 8 parts, performed throughout the western world, achieving international acclaim and receiving many awards for musical excellence, for artistic innovation and for building bridges of friendship, tolerance and understanding in the region’s journey toward peace and reconciliation. The BHO also launched the careers of many of Ireland’s most prominent performers today – some of whom now direct their own ‘harp orchestras’ carrying the tradition to the next generations.